Those that jump into danger in the dark... 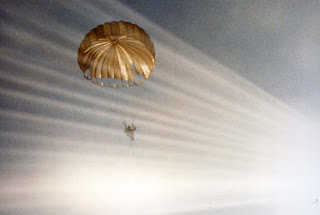 June 5, folks. John Wayne pretends to be a leader of Airborne troops hoping for a break in the weather and gets it (it was only a movie about real people doing the best they could). Never loaded up for a night jump has our President Obama, nope. I was lucky that I got to do many go out in the dark from the back of the perfectly good aircraft doing NAP of the Earth until time to bounce up to jump altitude. Nothing particularly brave about a paratrooper, they gave him twenty-five dollars for the danger, the glider riders got zip and had to worry about bad landings. Still everyone on the fifth of June, in the aircraft, on the ships, in the gliders going towards Normandy, France, knew this was the calm before the storm. Many had been in combat in Africa and Sicily, but most hadn't, they were trained and they knew the Germans were waiting and they knew what the grinding war was like in Italy where the defenses had been built up. It was dark and tomorrow would bring what tomorrow wasn't telling, the orders were clear, the beaches named, the drop zones identified, the weapons and equipment checked and counted, the lean was forward and those really ready were going to sleep until they were called to perform, the lightly nervous were quietly boasting or counting off their pre-attack mantra - stuffing fear in the back of the mind and mentally performing heroic feats for their fellows.

I once read about a paratrooper's account of his first jump, and all the things he thought of that he could have been doing if he weren't in the aircraft getting ready to do a fool thing like jump out of it, trusting his parachute and the jump master - then trying to remember all they had told him, drilled into him and preached at him and forgetting it as fast as he remembered and they called out "Ten Minutes!" and the drill was now the exercise. They were all getting ready for that point where the drill became the exercise and the attack was on and wouldn't stop for a debriefing or anything. Leaning forward, waiting for the ramp to drop, leaning forward holding the static line and keeping the equipment bag, ammo and rifle from fouling up on another paratrooper's gear - had to get out the door, leaning forward towards the jump. Nope, our current President wasn't there, he is too young. And although he honors those that were, the living and the dead - he doesn't understand why they went, he hasn't ever had to pay the price for living as an American, he probably thinks those serving in uniform today are doing it professionally for the money. But I know better, they have had to pay the price and understand the cost and they are leaning forward --- just hoping that there is some one watching their back, investing their lives, loves and sacrifices in important points for American Freedom.

Yep, everyone will concentrate on the D-Day Invasion of Normandy, France - 6 June, 1944, but I will honor the calm courage and preparation in meditation that was done on 5 June as they leaned forward ready to give everything they had, in the dark, in the water, up the beach and the cliffs to the hedgerows and on to victory or death. Considering the Economic Crisis, the Education Crisis, the Homeland Defense Crisis and the "can't we all get along?" crisis --- I am much more at home with those leaning forward preparing to attack for all the best of reasons than those hiding behind the headlines, or the media spotlight, hiding in plain sight.
Posted by Earl at 7:46 PM

Very well said. The only anxiety our current president has felt was probably on his first date with Michelle. Not quite the same.

Another great post, Earl. You write so well and say so much that is important.

On Sept. 22, 1966 I failed the physical (asthma) to join the military services of my country. It has remained and will always remain one of the biggest failures I've experienced in life.

People don't realize what a great privilege it is to serve the country that one loves so much.

Ya know Earl,
I had never thought of it quite this way. You have a unique way of putting things into a different perspective. So now, even I, an slightly educated woman, understands the importance of the preparations that went into the success of the following day 6 June 1944.

But I should have known that you would have a unique view of this. So thank you for reminding me that the days leading up to this were just as important and scary for all the men who took part.

"Our current President wasn't there, he is too young. . . .he probably thinks those serving in uniform today are doing it professionally for the money."

He almost certainly thinks that. HE'S motivated by money, and he has that Leftist belief that everyone in the world thinks exactly like he does and is motivated by exactly the things he is motivated by. He can no more understand the motivations of soldiers than he can understand that the Islamic terrorists can't be talked out of their beliefs in a single afternoon of "meet and greet".