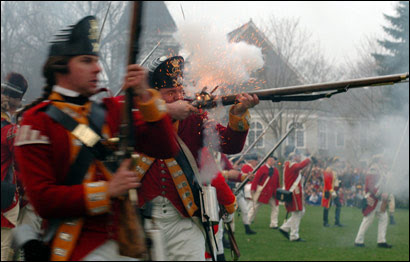 The British Army was marching to Lexington and Concord to seize munition stores and take Samuel Adams (not the beer) into custody. Not too unusual in modern sense - they would have been just like Americans in 'Blackhawk Down' sent to take out the opposition leadership - but then things do go wrong after first contact. Today's Americans don't grab their guns and meet on the common to line up and be counted when the King's men are coming, nope, all our demonstrations are done without military organization. We are much better armed but certainly not organized, we seldom do stuff together, there is no interlocking dependency for survival and assistance - it seems the experts and the government are providing it all and the people need to stay indoors, watch their televisions and await emergency messages and response teams. So it becomes difficult to imagine myself going out to wait in the darkness for the Lawful representatives of the King to show up, and do battle? Why? Presently I pay much more in taxes than the patriots of 1775, and I am less in touch with my local leadership than they were. King George the Third and President George Bush the Second were far from my choices and real voter selection - no difference and I am not standing armed, in line, waiting.

What was it that was worth getting the guns out, standing in line and opposing the government might? Their wives, families and homes were not threatened by the British Army - until they went into rebellion, and it was too early for rebellion. These were law abiding citizens, standing up for their lawful rights and against intrusive government. I guess I would have stood with my neighbors, and expected not to have to shoot anyone and I would have been surprised as most that day when the blood flowed and the bodies fell - and then I would have roared in righteous anger and chased them back to Boston, for they had killed my neighbors, my friends, my family or they had killed me. They were so wrong, government gone badly. Worth pondering about, my law abiding neighbors, few friends and fellow human beings.

The British forces marched in order back to Boston, they were professional and I admire the American Armed Forces in the same way, very professional. But the day is about the enraged citizens; betrayed and attacked by those professionals - would you have been armed, in line and waiting for that attack and betrayal?
Posted by Earl at 10:45 AM

I would have been the guy standing outside in quiet thought, until I heard the guns. Then I very well would have gotten involved.

These days we are unorganized, but we make up for it in sheer numbers. It wouldn't take long for the armed citizens to join forces. I know lots of former officers who can damn sure lead, and I would follow, if the need arose.

Let's hope that our sabers rattle loud enough so that the king's men can hear them, and let them know who they answer to.

I would have been at home. I hate demonstrations, crowds, etc.

As soon as the first shot was fired I would have been out the door, weapons at the ready, leading the charge.

As a woman, I wouldn't have had a choice.