Did some needed work on RWVA and Appleseed... 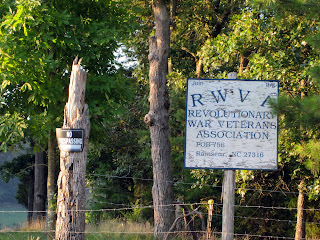 Learned about Known Distance and how we can add it to the already full plate of rifle marksmanship. Then came my fun part, using a borrowed M1 and ammunition I was able to fire forty-two rounds on targets, 200, 300, 800 yards away, will have to do much more of that, I could hit the ten rings, but never as many times as I was aiming to do so. Back to basics, and without the real changes in distance one may never need to change one's sight settings. So it is worth practicing and shooting more around.

Camping up at the range tonight, going to Winston-Salem tomorrow evening - I did get immediately recognized, the only motorcyclist from Washington here for the clinic and shoot. Very nice people in RWVA, and we worked on trying to get more positive exposure for people like my family that don't shoot firearms, and also for those that do but are too busy to join and find their almost forgotten Heritage - the American Rifleman, didn't someone say all the British Empires wars were won on the cricket fields of Eton?

Until they met people in the colonies that were too busy to play cricket, but understanding the need for a free people that could defend themselves. Keep that thought, this is the Fourth of July weekend, and it wasn't all those golf courses that abound that keep this land free, a concerned, awake and watchful armed citizens. Honor them this 4th, they did it all for you, pick up your rifle and bring up your skills. See y'all on the range - not the golf driving range, the RIFLE range.
Posted by Earl at 6:47 PM

I am so glad to have had a chance to learn about the project and what it stands for. I was explaining to the family yesterday at the brother party, so the word is being spread.

The 'irony' of it all. I was in Winston-Salem a week ago. We ARE two ships passing in the night.