The Score and the Price, thoughts about this trip... 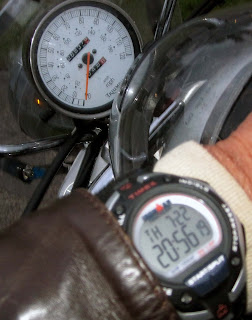 Last December the idea bubbled that I should see my mother, ride my motorcycle to do so, and attend a Known Distance Clinic in Ramseur, North Carolina. Since I was about to lose my job I would have the time. Such a simple idea.

So now I need to look at what happened and total the adventure.

I thought I would do about six thousand miles at most, forgetting how many turns there were at Deals Gap (when I started I hadn't really planned on the Dragons Tail, but thought it could be cool). Starting mileage 17736.7 and ending yesterday 26837.9 total covered 9101.2 miles - it is time for a major service on the Trusty Triumph, a service half way would have been a better idea. Triumphs can hang.

Important stuff:
I did see my mother, several days in a row, enjoyed every minute of it.
I did visit my aunt Velva in Minnesota, from lunch to dinner, enjoyed her as always.
I did see my aunt Irene in Florida, liked giving her a hug as I departed.
I visited cousin Cliff and Linda in Illinois, cousin Daryl in Florida, and Cousin Merl and Marsha in Tennessee. Sorry about the missing ride, will unload the bike next time and wait at the end of the gravel drive. Did talk to cousin Ron in Hawai'i while visiting Daryl.
Visited and stayed with my sister Nanette in North Carolina, seeing John and Shane. Missed you Darinlee, sorry but only had so much time.
Visited and stayed with my niece Paula in Florida, seeing Dan and Joy (my sister) and loving the boys Perrin, Caleb and Garrett - such marvels - what will they become?
Visited and stayed with Noah, Jamie and two fine black cats in Colorado. Nice seeing Barbara and Gloria and dining with everyone Mexican there.

RWVA Stuff: as an instructor attended one day of the Spearfish, SD Appleseed, very neat and attended both days of the Saint Augustine, FL Appleseed and my first taste of Long Distance instruction. Attended as a student at the feet of masters the two day clinic at Ramseur, North Carolina for Known Distance, Long Distance and Actual Distance instruction and modifications to the POI. Thanks to Mrs. "Spanner" I got to shoot an M1 Garand on the range, out to five hundred yards, and that is something I will be adding to my things to do better and much more often. Great to meet "Bulkhead" and everyone at the range and the clinic. I got a special "Triumph Across America Tour" coffee cup there and a mission to get the bloggers to the Appleseeds to find out and report on the event and help swell the momentum.

Blogger stuff: Just as a "for grins", I thought I could find some of these bloggers I read daily or have heard about and read periodically - I didn't expect that I could but I kind of looked some of them up (some only exist in the blogsphere or my mind). I met so many great ones, spending time and enjoying them twice or more as much as my reading their thoughts and notes. Real wonderful people, having met their like at the Boomershoot Blog media event in 2009, why would I think it would be different in 2010?

Cool Motorcycling stuff: Two days around Yellowstone National Park on motorcycles with my brother and nephew - too beautiful and racy. Beartooth Ridge ride out, awesome for all the best reasons. Deals Gap, Tail of the Dragon - yes, 318 turns and twists in 11 miles, but the ride to and from is not to be missed either - that is great country for a meaningful Summer ride. Do pay attention. Oh, yeah, next time count the number of Rest Stop picnic tables and benches slept upon while recovering from the frantic Interstate pace - only in Utah were people traveling the speed limits, does that tell me something? I prefer the benches to the picnic tables - when sleeping on the picnic tables I often imagined what it was like to be the next offering to angry Aztec gods... sharp obsidian blades and dedicated priestly butchers.

Lost along the way: One pair of leather work gloves in Thorton, along with the Hawaiian sandals I never wore much, two bungi straps. The rightside cover with America on it (be cool if it was added to the Tree of Shame, but I probably lost it at a rest stop take off later). Interest in network news, political leaders from all parties, talking heads, and commercial enterprise opportunities on television ads. Hmm, didn't watch much television at all - even when trapped in a motel room (where I showered and went immediately to sleep). My innocence of the terrible danger of fire ants when sleeping on the ground in the hot South.

The biggest question I had to answer - almost universally by other bloggers and family members that read my Facebook or blog. What is Appleseed? Which immediately makes me think I don't write well, and starts my explanation of Fred, the 4 MOA and people and events of April 19, 1775. And I didn't mind it any time I was asked, but does tell me that out of 300 million Americans I have my work cut out for me.

Too early to decide all the stuff I gained from this experience - having met Noah and Jamie away from their wedding and one on one was great. But I will think about all that again, daily as I start to find myself. My wife changed the fixtures in the bathrooms, cleaned everything (yes, everything!), slept on the floor in the family room, with whistle and flash light and very lightly (I shouldn't leave her with her fears so long again, she was still watching television news and talking about the constant lawlessness in this part of the world). Rumor has it that we need each other, and don't do our best apart. Yep, very true. The only reason to speed across the United States was to get back to my normal best behavior... or a job (and that wasn't happening, yet).

Would I do it again, NOPE, impossible to repeat the best stuff and there was so much of it. Would I do it different - better planning, lighter load, and errant thoughts race by - and still in the end, from weather (bad in front of me or behind) to who do you see now (and so much not planned) worked out like I was being watched over and guided to the right spot at just the right time - totally out of my control but much appreciated.

It is on the list of things to do now I am home - Thank you all that made this a great adventure, who hosted me beyond possibility of repayment, who didn't cringe when I showed up on the doorstep, and all those who didn't try to wake me up and get me to move on out of the Rest stops. Really, the America I believe in was all there for my benefit and I am so grateful. Y'all take care out there - it is safer, I am temporarily off the road.
Posted by Earl at 10:12 AM

Glad you made it home safely, Earl. Next time you pass through KC, give us a holler. My e-mail addy is on my blog.

Thanks for the ride. Enjoyed it.

Savor the moment - you certainly deserve it. Glad you're home safe!

Thank you Earl. Your adventure had a more positive effect on those encountering it then you may suspect. It gave my Father & I the chance to take a week long motorcycle vacation together. Something we haven't done in 20 years, and likely would not have done without outside motivation (you).

The Memories of Yellowstone are priceless, thank you again.

Glad you are safe at home and thanks for sharing your adventures with us.

Glad you're home safe. Thank you for letting us ride along vicariously. :)