If I had wanted to shoot I would have stayed home... 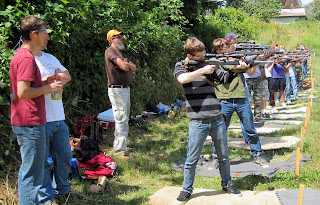 I get tempted, once in awhile, you know lovely ladies with smiles to die for and motorcycles and firearms and ice cream. See I do have priorities, but then I hardly ever do more than enjoy the tickling of my 'attention', I am getting real good at ducking ice cream and my survival instinct makes the ladies sound alarms in my head, so I never hear any sweet nothings... but the Shoot Boss was tempted to the dark side yesterday, one of his newest Red Hats (full instructor) wanted to shoot his M1A and was trying to get us all to pull our thirty calibers out of the vehicles to shoot. (Since Wade built the range, he can shoot anytime, but lonely shooting is like lonely motorcycle riding - did it happen if no one was there to see?)

My only response was "if I had wanted to shoot I would have stayed home, I am here for the Appleseed, the shooters and the Heritage. After we shut down, I might shoot but would likely be driving down the highway towards home" I guess I am focused, but really I do the Appleseeds because I want more shooters and instructors and people having a safe good time to talk about next week at their work or home, that families can come and camp out, learn more about each other without electronic distractions. Or it could be because I am really paid so much for the pleasure, remembering that I am a volunteer - in a real non-profit activity, just 4 MOA and our Historic Heritage.

There were thirty-four shooters on Saturday, two became Riflemen. There were twenty-five returning on Sunday and five more became Riflemen. I had little to do with that, except I gave them what I knew, saw them needing to improve, and why it would be better when they found it.... in the end they have to make each shot the way we told them, and they get better as they build on the basics. I guess I really did add my bellow to the calling the line, and I added advice to the new Instructors in Training (IIT) as they worked the line and the shooters. I was never bored and I did encourage the Shoot Boss, but we were doing fine as an Appleseed, except when we waxed eloquent - verbose (wordy?) -- we know too much and want to add it all to our teaching, instead of paring it down to the key words and basics. One would think we lived on the number of words we wing away... Still, the shooters have many things to mull over - it was a fine weekend for shooting and sharing the Heritage of 19 April, 1775. And the New York Times covered us in print on Sunday - they should come out and shoot, too. Really!
Posted by Earl at 8:08 AM

I've not been to an Appleseed shoot. My local gun club sponsored one last year but I couldn't attend. If/when there's another, I'll be tempted to haul out my Marlin 39A. I, too, have a M1 Garand that's older than I am, but 30.06 ammo is expensive and I'm saving mine at the moment.

I still love that TING! after that 8th round.