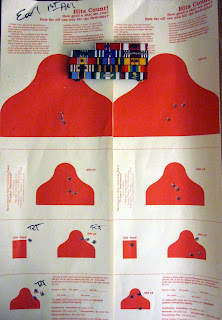 I am having a great weekend, shooting as a Veteran (FREE!) with Appleseed in Moxee, where Big Red's is the place to order pizza - way better than great pizza. I brought my ribbons, and then had to explain what they meant for those that asked, my uncle had one that even he didn't know what it was called, we do start forgetting, and every generation they seem to be more issued - starting to look like comic Italian generals. Still I was wandering back into the storage areas of my darker mind as I thought about all I didn't say about them and where I was when. Since most of my askers werent born when I served for some it was interesting... remember that I belong to the Revolutionary War Veterans Association, and those real vets from that era got only a Purple Heart for different reasons than the current one, and their best reward was land grants for starting new on the frontiers.

Anyway, I woke to a very hot room, and thought about how my shooting had been the day before. I give you the two Redcoat targets, AM and PM and it was better by end of day, but really I need to shoot more, instead of shooting my mouth. I went to my first Appleseed and learned much, went to others and taught and learned - always having fun and always learnin'. Still need more shooting, and dry practice to increase my proficiency. Because the why I went to Appleseed hasn't changed but I seem to have picked up stuff along the way - the good stuff is the friends and fellow shooters, the smiles of the youngsters, the best shooting and you get to pretend that you helped make that happened (no, it is always the shooter, the target and the rifle - and that is the shot!).

I live in a nation that has lost its way, and the Terrorists have won. They changed America - just like Columbus, they will be remembered long after Earl isn't. Our government treats its citizens as they travel like cattle going to market. Our citizens that can "if they wanted to" creat a better government (oh, that makes everyone's head hurt) accept being treated like cattle because they feel safer on their way to market. But I don't worry, folks, really I don't expect a government to save me in anyway - some of their foolishness has tried to kill me in various places and for things they don't remember nor want to admit - they write books about it.

But all that government hasn't a real handle on making my weekend nor shots count - I am one of the masses waiting for the end. of the show, the movie, the life of Earl, the future, the past, the now... and I came to Appleseed to learn how to shoot better and was distracted along the way. I need to shoot better, so like Bruce Lee - study, practice and shoot better. Glad that I live in the country where the forces of Gun Fears haven't control yet - but then I do have to do it their way? but they don't shoot - remember they live in Gun Fears. I can't learn to make my shots count with them. That is like putting the government that couldn't stop the 9/11 terrorists in charge of the next group of terrorists... or of pretending to stop them.

I do know, in the end, how well I shoot - has to do with me, the moment, the rifle, the ammunition and the target - and all the forces between. And my brother tells me that the government hasn't stopped my shooting, but they pay a lot of people lots of money for the noise between me and the targets, the noise I am not paying attention to. Why did I go to Appleseed, why do I still go to Appleseeds? So I can be a better shooter - why am I not listening to NPR, The Federal Government, Homeland Security, The Terrorists, New York Times, Time magazine, ABC World News - because none of them are doing enough to help me shoot better - they are just noise. As the RWVA has its internal infernal disputs about the mission and the message and the man - I am still looking for improving my shooting. Will be taking my M1 Garand into the fray today... and either The Guy or Fred could help me improve my shooting but they aren't where my Appleseed weekend is, the the folks here on this line, shared the cold, the wind, and the snow flakes beating vibrations into the barrel of my rifle which rippled my shot (this is my blog and I'll tell it the way I saw it happen). Anyway, those that care sent me here, support my flickering eyelids (don't blink!) and I will be trying to be a better shot - which is why I came here two years and a month ago... and do again today... don't lose focus. Only God loves you in the ways that matter, and only you can share that with those that matter, so make all your shots count and do it with love, they will hit the target.
Posted by Earl at 3:48 AM

Earl, as we all know, shooting is about focus; obviously your focus was better in the afternoon :-) Keep teaching/educating the new shooters Sir!

Ever try to automate your free BTC claims with a BTC FAUCET ROTATOR?

From my experience the best Bitcoin exchange service is YoBit.