Gee, what were they thinkin'? Superior Scribbler? 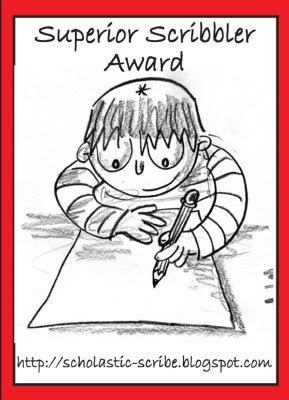 I have been nominated and that is different, but I seem to be a write in so I can live with that, thank y'all very much.

Old NFO (Naval Flight Officer?) of Nobody Asked Me (and he shoots so well) thought I was worthy of a Superior Scribbler Award.

So to keep the magic moment going I need to find five to nominate:

The Armed Canadian who is a fine writer and shoots lots of strange old stuff and can look at Americans with clear eyes.

Frank W. James, of Corn, beans spent brass... who writes for love and money, but I read him because he writes about work, the land and it rings with the truth of traditional values.

MC, an old guy on a skateboard, Hopeless Old Men on Skateboards is where he scribbles artistically and he hits me in several levels, being hopelessly old myself and my son the Skater so far away.

Jeffro, of The Poor Farm , writes from his truck driving and sometimes the homestead, and drops off pictures and political cartoons and such to share.

BT, known as Big Tobacco, from The War on Big Tobacco , warning and disclaimer - he writes like a foul mouthed adult with stuff on his mostly military mind and a bit of an attitude. But I read him regularly. I once knew fellows like him, and all he ever alludes to about women isn't the half of it...

Now, according to the rules….
Every Superior Scribbler will name 5 other Super Scribblers.If you are named you must link to the author & the name of the blog that gave you the award. Then you must display the adorable award and link to THIS POST, which explains the award. The same post also allows you to add your link. Then they will have a record of all the people who are Super Scribblers!

There are several bloggers like Tam, Breda, Brigid, Jerry Pournelle, Kim du Toit, Chris Byrne that are too good to trouble much, but I love to follow their thoughts and stories.

Don't you know I would get so excited I forgot to publish the post?

Well deserved, even if I do say so myself :-)

Thank you Earl. Your opinion means a lot to me.

For once I'm at a loss for words, other than Thank You and now I have to figure out how to Link someone on my blog.

Just spotted your link. Thanks for the kind words Earl.